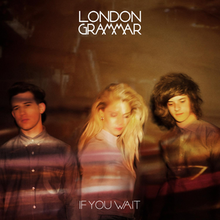 If You Wait is the debut studio album by English electronic music band London Grammar. It was released on 9 September 2013 on Metal & Dust Recordings, while being distributed by Warner/Chappell and Columbia Records. Six singles have been released from the album: “Metal & Dust”, “Wasting My Young Years”, “Strong”, “Nightcall”, “Hey Now” and “Sights”. The album debuted at number two the UK Albums Chart, selling 33,130 copies in its first week.