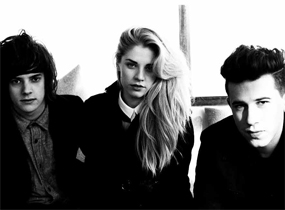 London Grammar are a British electronic pop trio formed by Hannah Reid, Dan Rothman and Dominic ‘Dot’ Major. Their début EP, Metal & Dust, was released in February 2013 by Metal & Dust Recordings Ltd. Their debut album, If You Wait, was released on 9 September 2013 and set platinum certification by the British Phonographic Industry (BPI) association.

Both vocalist Hannah Reid and guitarist Dan Rothman are originally from London and met in a residence hall at the University of Nottingham during their first year in 2009. Rothman saw a picture of Reid on Facebook with a guitar and sent her a message to see if she wanted to collaborate. They were joined by Northampton native Dominic ‘Dot’ Major (keyboard, djembe, drums) a year later, after he began playing music together with Rothman. They chose the name as ‘not only was it where we’re from, but London is also so international and multicultural that it actually felt like quite a universal name in a way’.

After completing their studies in the middle of 2011, the trio moved down to London to pursue a career in music. By the end of the year they were managed by Conor Wheeler who began promoting them. The band began by playing low-key gigs at local bars, honing their material. They soon found themselves noticed by a number of A&R people and they were signed with the Ministry of Sound while Big Life took over the management duties in the second half of 2012. In the same year the trio did some early recordings with Rollo Armstrong of Faithless, and Liam Howe of Sneaker Pimps. Later in the year the band continued to work with Tim Bran of Dreadzone and Roy Kerr and by the end of the year most of the recording had been completed. On 12 December 2012, the trio posted their song “Hey Now” on YouTube which immediately received a large amount of attention, partly due to the relative anonymity of the band and the lack of promotional photographs.